Acquired in 2009, Simone Boisecq’s The Faun marks the first move to fill a void in the museum’s sculpture collections, thus adding a work from the second half of the twentieth century. It also offers the opportunity to give recognition to a neglected artist, despite the fact that a number of her works have joined French public collections, though with little fanfare.

As a rising talent in Paris in the years immediately following the Second World War, Simone Boisecq struck up friendships with Picasso, Brancusi and Zadkine, while Germaine Richier had praised her work as early as 1956. The Faun, completed that same year, is an important work for more than one reason: it represents a significant milestone in Simone Boisecq’s development as an artist, as she was gradually moving away from ceramic in the 1950s to work instead in bronze. Furthermore, this sculpture speaks of her personal explorations, her complex aesthetic universe peopled with figures from mythology. Here, the faun, his smiling face crowned by two unequal horns, seems to call attention to the duality of every being, a theme to which the artist has returned repeatedly since. 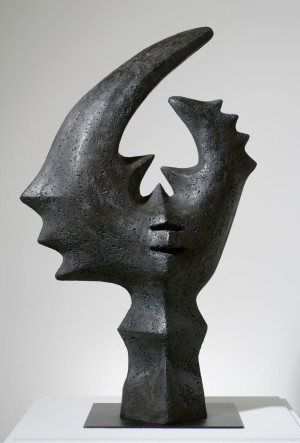