In 1904, Robert Delaunay gave up designing theatre sets to devote himself to painting. Self-taught, with a dual interest in both technique and nature, he was fascinated by contemporary painting, Impressionism, the Nabi movement, whose members he met at Pont Aven, Japonisme and finally Pointillism.
The works he showed at the Salon des Artistes Indépendants between 1904 and 1914 traced the development of his style.
In around 1906–07, Delaunay went through a neo-Impressionist phase during which he painted mostly still lifes and portraits, influenced by his study of the work of Georges Seurat and the colour laws formulated by Michel-Eugène
Chevreul and Ogden Rood.

Still Life with Parrot, of which is there a mosaic version at the Thyssen-Bornemisza in Madrid, dates from this period and his earliest experiments with the subject and colour. The subject is treated as an object, represented in a tight, almost stifling frame, with the primary aim being to reproduce the forms created by light. The reflections on objects and the projections of shadow interested him as much as the forms that they created, which became veritable motifs.
Delaunay applied Chevreul’s theory on the simultaneous contrast of colours by juxtaposing brushstrokes and pure colours derived from the prism. These are more mosaic-like in the plants and the parrot, whose forms are reconstructed
by the eye. He created a synthesis between the combination of the modular repetition of Divisionist brushwork and the freedom of Fauvist colour. A youthful canvas, belonging to the artist’s earliest experiments with colour, this composition with its pure colours already prefigured his growing interest in colour as the sole subject of painting and heralded his future vocabulary. In 1912, he would write in a text published by Pierre Francastel that he had had the idea for a canvas that would be based entirely on colour and colour contrasts, which would be perceived simultaneously in one go, something no artist in France, not even the Fauves, had yet dared to do. Colour, being sufficient in itself, thus replaced all the other pictorial means, providing form, composition and subject, paving the way for a modern art that was no longer descriptive but constructive, giving the founders of abstract art the means to repudiate realism. Delaunay’s reputation quickly spread to the other European countries where he exhibited, notably with the artists of Der Blaue Reiter in Munich in 1911 and with the members of the Der Sturm group in Berlin in 1913. 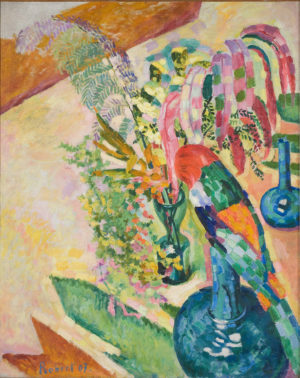