Absence of Hostilities No. 2

Born in Florence, Alberto Magnelli worked mainly in France, where he was one of the leading exponents of abstraction. Upon his arrival in France in the mid-1910s, he befriended Picasso, Léger and Matisse, among other artists, and thereafter made a gradual and resolute shift away from figuration towards geometric abstraction, a boundary which he had definitively crossed by 1936. By the 1950s, his compositions tended to set forms against each as opposing forces, their outlines strictly delimited using colours. Such is the case for his Absence of Hostilities No. 2 from 1948.

Acquired by the Musée Unterlinden in 1990, this canvas consists of superimposed and interlocking coloured areas that reveal themselves through transparency. The painter creates tension between ever-so-slightly curved lines and strict right angles, engendering conflicts hinted at by the work’s ironic title. The chromatic palette is reduced to shades of grey occasionally enlivened with bursts of red. 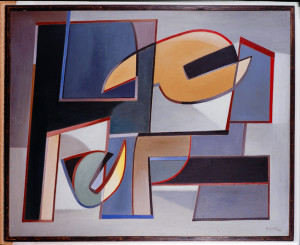